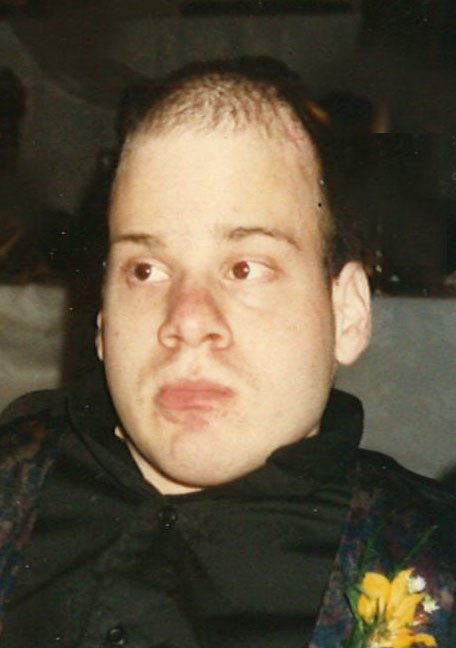 Vaughn was born in Sarnia June 29th. 1977. From the moment he entered this world he was fighting to remain a part of it. When doctors gave him twelve hours to live being born with spina bifida, Vaughn had already decided he would choose his own fate and destiny. He did just that and never stopped in all his 43 years

Vaughn grew up in Blue Point where he was wild and free as any other child and his siblings didn’t treat him any different. This often included wheelchair runs through the forest, being tapped to his sisters BMX bike so he could go for a bike ride too, to taking off with the neighbours boat. He grew up a free spirit at least as much as our parents could allow.

Vaughn went on to do amazing things. At the age of 6 he went around St. Joseph’s hospital collecting money for Rick Hansen’s Spinal Cord Injury Research Foundation. He was able to then meet Mr. Hansen and had his picture taken for the newspaper. One of many times Vaughn’s face would appear in the news.  He loved playing baseball, throwing balls back and forth with his dad. His favourite team was the Jays of course! Vaughn took comfort in the presence of mother nature.  He loved all things outdoors and country, including music .... if you knew Vaughn you also knew Elvira and the Gambler and often heard him belting his heart out to these two songs.

Finishing high school was one of Vaughn’s greatest goals he set for himself. Spending years in the hospital made it very difficult for him to complete his grade 12, but in between lifesaving surgeries and ups and downs, he finished his quest and received his diploma.  Vaughn’s greatest dream was to fall in love and get married one day and it all came true when he met this beautiful woman name Jackie Pentland. The two of them had previously met years ago at Easter Seal Camp and ended up dwelling in the same apartment complex years later. They fell in love and his life changed forever. He became more fierce, stronger and more passionate. He fought every battle for her, for them, for their life together. He wanted to marry this girl he called his Angel and he did. On July 22, 2017, they said their vows and we all witnessed the most beautiful ceremony of love we had ever seen.  Now with his bride and tribe by his side, he fought endless battles and won.  He never gave up, never gave in. He taught all of us how to be brave in times of suffering and that your will to live always outweighs your struggle. Vaughn taught us all to never take things for granted. To appreciate everything we have and our ability to make things happen for ourselves. He taught us to be grateful, to love without hesitation or limits. That our bodies do not define our souls. He showed us how to help those in need and less fortunate. Vaughn loved to do volunteer work and worked for the Family Counselling Centre as a part of the Tel-Check program for 5 years. This involved phoning clients having, friendly chats checking in on their wellbeing and reminding them to take their medications. He loved helping other people. He also loved comedy and was in his own rights his own comedian. This man truly made every single person laugh that was in his presence.  He was off the cuff and so funny!  People just could not get enough of him.  He had a twin in this world, his sister Cara, the two of them together were pure trouble . They spent many months together, in the same hospital rooms waiting for surgeries, and on hospital beds at home healing. The bond they formed was powerful enough to remove them from any kind of pain or boredom. It is a bond that goes beyond realms. He is forever leaving a void in her world now. Vaughn will be extremely missed by all his siblings, parents, nieces and nephews, aunts, uncles and cousins, friends, nurses, doctors and PSW’s who all had their lives touched by a little more colour, wisdom, laughter and love for having been so blessed by knowing him.  He was truly a teacher sent by God. The heavens have gained the most incredible Angel and there will forever be a loss here on earth, but for the first time in 43 years our Vaughn has broken free from the chair that confined him, took his very first steps of freedom into his true gloriousness.

Share Your Memory of
Vaughn
Upload Your Memory View All Memories
Be the first to upload a memory!
Share A Memory
Send Flowers