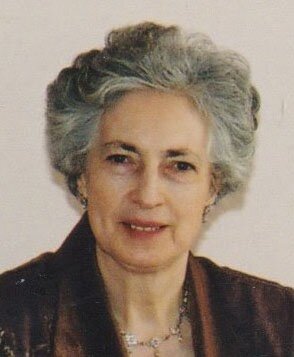 Annunziata was born on the tiny and beautiful island of Ischia, Italy on June 15, 1938. Being the oldest in her family, she started sharing in her parents’ responsibilities at a very young age. She helped tend to the properties entrusted to her parents to earn a living and raised her siblings through World War II and beyond. She was particularly fond of taking care of the family goats and the milk they provided. In 1955 she married her love, Vincenzo, in Ischia.  Shortly afterwards, she sailed across the ocean, courageously traveling by herself to join him in Sarnia, Ontario, Canada. In Sarnia, she became the best mother to her four sons. She was their primary educator in all things, but most importantly in the faith of the Roman Catholic Church. Annunziata worked in the home. In particular, she was an exceptional cook - skilled in the fine art of preparing two of Ischia’s signature dishes - Rabbit all’Ischitana and Eggplant Parmesan. She prepared pastries at home that are typically only available in Italian patisseries such as Neapolitan babà and sfogliatelle. The hobby that brought her most joy was basket (cestini) weaving which she also shared with her grandchildren and nieces.

Some have described her as the “the glue that held everything together” - maintaining peace in her family and extended family. Excluding nobody and going out of her way for friends and family was second nature to her. In fact, her nieces in Italy describe her outwardness as “splitting herself into twenty-four for all” (si faceva in ventiquattro per tutti). Perhaps the best example was that even as a young, busy mother and housewife, in a foreign country, she assisted many newly immigrated family and friends get acclimated to their new surroundings.

Annunziata is best described as a humble and faithful servant of Christ - a Christian both in prayer and deed. When she was resting from her work, she would typically recite prayers or listen to/watch religious programs. While in Italy during the Balkans’ conflict of the nineties, she welcomed and fed wandering refugees into her home. Like St. Francis of Assisi, she was a lover of the natural world - always taking a keen interest in biology. She was a member of the St. Francis Cabrini Catholic Women’s League of St. Peter’s Church in Sarnia and was elected president from 1987 to 1989.

Approximately eight years ago, the beautiful mind of Annunziata slowly began to deteriorate due to Alzheimer’s disease. It robbed her of almost everything that she was and eventually stole her life.

Visitation will be held at the McKenzie & Blundy Funeral Home & Cremation Centre, 431 Christina St. N., Sarnia on Sunday from 2-4 & 7-9 p.m. Mass of Christian Burial will be celebrated at St. Benedict’s Church on Monday, August 15, 2022, at 11 a.m. The funeral mass will be livestreamed and can be viewed by visiting St. Benedict's YouTube channel.  Entombment to  follow at Our Lady of Mercy Mausoleum. As an expression of sympathy, friends who wish may send memorial donations to Alzheimer Society, 420 N. East St., Sarnia, N7T 6Y5 or the Inn of the Good Shepherd, 115 John St., Sarnia, N7T 2R1. Messages of condolence and memories may be left at www.mckenzieblundy.com

Share Your Memory of
Annunziata
Upload Your Memory View All Memories
Be the first to upload a memory!
Share A Memory
Send Flowers