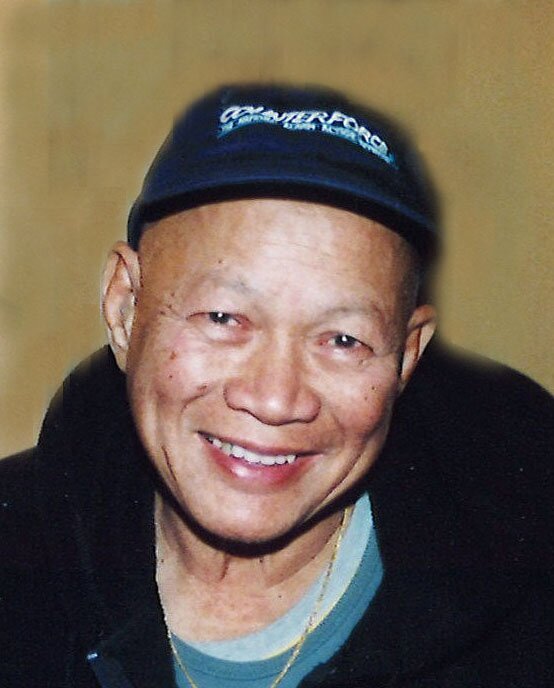 ROSARIO, Juanito Ballon – Once upon a time, he sat in the corner of the church, greeting everyone during communion or sitting under the bridge parked in the handicapped parking spot, watching everyone walk by. Now he sits peacefully with his parents and brothers keeping watch over us here. Juanito passed away peacefully at Bluewater Health on Tuesday, May 24, 2022 at the age of 87. Dear father of Mary Lou Rosario, Sarnia, John Rosario (Mia), Lac la Hache, B.C., Mary Con LeFranc (Bruce), Kaleden, B.C. and Ed Rosario (Holly), Sarnia. Loving grandfather of Charito and Conchita Humphreys, Joel Rosario (Kailee), Ana Hohmann (Jake), Dominic Rosario (Courtney), Ellie Buhrke (Kyle), Brother Joshua, Maggie, Noah, Lucy and Benedict Rosario, Jaren, Marisa and Ben LeFranc and Calvin and Alyse Rosario. Great-grandfather of Peter, Waylon, Ben, Miriam, Alena, Isabella and Veronica. Brother of Pacita Morales (late Rudy), Markham. Also surviving is the mother of his children Begonia Rosario. Predeceased by parents Emilio and Natividad Rosario and brothers Rodolfo and Melencio. Juanito was retired from the dietary department at Bluewater Health where he worked for 27 years. Over the years, as a dietary aide, and from countless hours sitting under the bridge with Tim Horton’s coffee, he befriended people from all walks of life. As an immigrant, he had an inherent interest in people’s lives wanting to know where they came from and how they got there. Learning about people led him to be an avid collector of stamps and foreign currencies. His children and grandchildren knew him as a jokester and to always have a joke book on hand and a beer to hand out. The family would like to thank the numerous people who helped support Juanito at home over the past year, and more recently the staff at Bluewater Health, Med A and Palliative Care. Cremation has taken place. Mass of Christian Burial will be celebrated at Our Lady of Mercy Church on Saturday, May 28, 2022 at 11 a.m. Interment at a later date at Our Lady of Mercy Cemetery. As an expression of sympathy, friends who wish may send memorial donations to the Ontario Heart & Stroke Foundation, 1200-2300 Yonge St., Toronto, M4P 1E4. Arrangements entrusted to McKenzie & Blundy Funeral Home & Cremation Centre 519-344-3131. Messages of condolence and memories may be left at www.mckenzieblundy.com

Share Your Memory of
Juanito
Upload Your Memory View All Memories
Be the first to upload a memory!
Share A Memory
Send Flowers