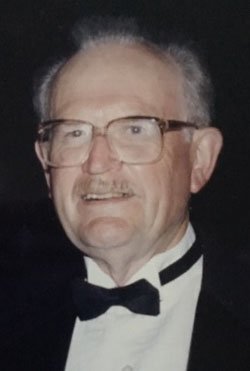 It is with heavy hearts that we announce the passing of Dr. James Carr Harvey on Tuesday June 16, 2020 at Victoria Hospital in London Ontario.  He left this world peacefully with his daughter Laurie and his son Jim at his side.  Jim was 93 and is survived by his wife of 71 years.  Norah Mary Fennell; daughter Christine Matthews & husband Michael; son Jim Harvey & wife Corienne; daughter Laurie Harvey and wife Pam; and sister Peggy Chute of Lytton BC.  Jim is also survived by grandchildren Lyndze Harvey (Tyler), Chris Harvey (Tasha), Carleigh Harvey (Charlie), Jeannine Fluery (Darren), Jonathan Curts (Holly), great grandchildren Finlay and Seamus and many nieces and nephews.  Predeceased by his brother Phillip and sister Rosemary.

Jim was born February 25, 1927 in Abbotsford, BC to Nina (Carr) and Stanley Harvey.   Jim’s mother, Nina passed when Jim was still a baby, but he had the great fortune of having a loving second mother when his father Stan remarried Jim’s school teacher, Mary Tebbutt.   After growing up on the family farm Jim attended the University of British Columbia in Vancouver for one year before he moved to Ontario at age 17 to attend the Ontario Veterinary College at the University of Guelph.  Upon graduation, at the top of his class, and as the youngest ever graduate of the OVC, Jim interned in small animal practice at Cornel University in Ithica, New York.  Jim spent a semester learning his craft and was then offered the opportunity to work in California.

At the beginning of his final year at school in Guelph Jim met the love of his life Nora Mary Fennell.  They continued to date long distance when Jim moved to New York.  When Jim received the call from Hollywood to work there, he called Norah and they decided to get married ahead of plan and moved to Burbank.  After very humble beginnings Jim was literally Veterinarian to the stars of Hollywood.  While they enjoyed life in the California sunshine and the birth of Christine, they saw their future back in Canada and settled in Sarnia where Jim eventually became a partner at the Blue Cross Animal Clinic where he enjoyed over fifty years of practice which included both large and small animals.  He was a gifted diagnostician and surgeon and treated all his patients and their families with respect and compassion.  He truly was a “real life” Dr. Doolittle. Heartfelt thanks to the staff at Victoria Hospital for their wonderful care during the final days.  A very deep expression of gratitude is extended to the staff at Glendale Crossing for the excellent support, care, and compassion they showed our Father each day.  Jim spent his last five years in the Brighton neighborhood at Glendale with Norah.

A celebration of Jim’s life will be held at a later date due to Covid-19 restrictions.  Arrangements entrusted to the McKENZIE & BLUNDY FUNERAL HOME & CREMATION CENTRE, 519-344-3131.  Messages of condolence & memories may be left at www.mckenzieblundy.com.

To send flowers to the family or plant a tree in memory of James Harvey, please visit Tribute Store