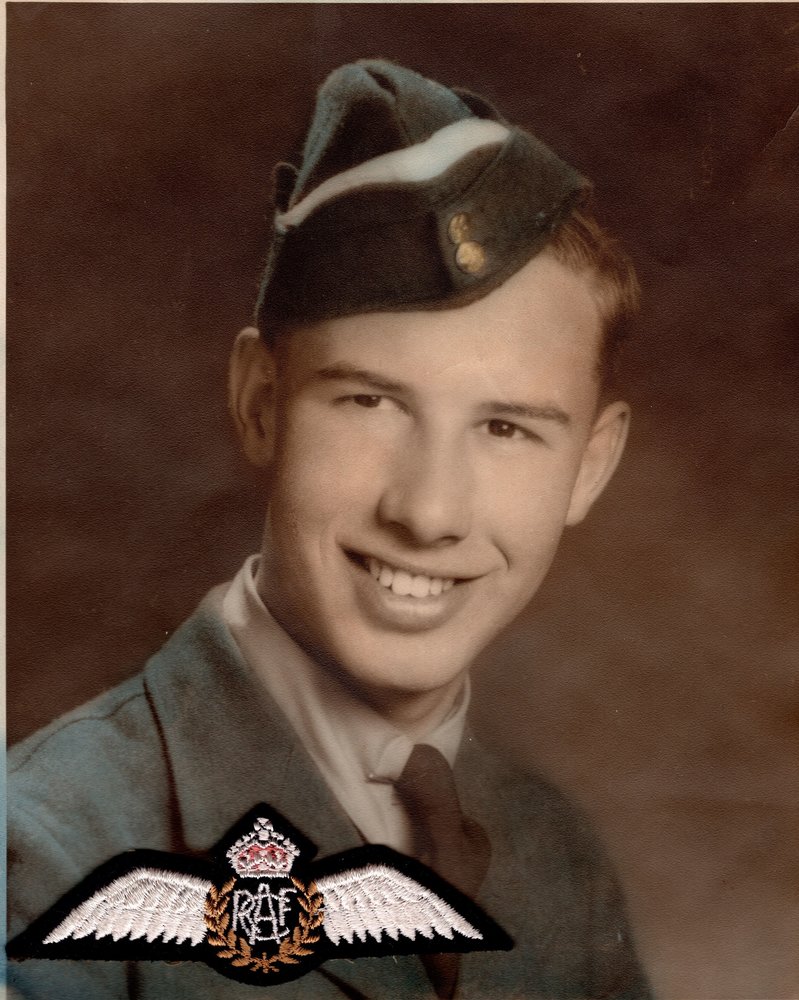 Doug McFadden passed on May 7, 2019, at Bluewater Health, Sarnia, Ontario, in his 95th year. He was born in Chatham, Ontario on January 5, 1924. His mother was Nina Bernice McFadden (nee Elgie) and his father was Harry Franklin McFadden. He had three brothers, Donald Franklin, Lawrence and Louis. His mother, father, and brothers Donald and Louis, predecease him. He is survived by his brother Lawrence, his son Grant (married to Alexandra Lucas), his daughter Lorraine (married to Bill Browett), and his stepchildren Wayne Weiss (married to Laura), Warren Weiss, Owen Weiss (married to Sherry), Scott Weiss, David Weiss (married to June), Alan Weiss (married to Michelle), Lynn Mathieson (married to Greg), and Paul Weiss (married to Michelle), as well as 14 grandchildren and 15 great grandchildren. Doug grew up and finished high school in St. Thomas, Ontario. He joined the Royal Canadian Air Force during WWII, and after training in Canada, was sent to England while he completed his training as a pilot. In one of a series of many lucky events that marked his life, his training ended at the same time as World War II in Europe, and he did not face the active war time service that took his brother Donald in 1943. After returning to St. Thomas, he married Beatrice Mary Jordan (1926-2003) and completed a Bachelor’s Degree in Chemical Engineering at the University of Toronto. He and Bea had three children, Mary (deceased shortly after birth), Douglas Grant (Grant) McFadden and Lorraine McFadden. He worked most of his life for Dow Chemical, first in Sarnia and later in Montreal. He and his second life partner, Jean Weiss (1927-2017), had a joyous union of 35 years. Doug was simply a lucky man throughout his life. In his youth, he won many contests, such as Dunk the Clunk in Sarnia in 1957, and a trip to Europe in 1969. He travelled abroad many times. He built by hand his own home, with the help of his brother in law Alan Jordan, in Sarnia. He had three children from his first marriage and eight stepchildren in his second union. He was a kind and decent man with an infectious smile. At Doug's request, there will be no formal service but the family will have a private gathering. Arrangements entrusted to the McKENZIE & BLUNDY FUNERAL HOME & CREMATION CENTRE, 519-344-3131. The family wishes to thank the staff of Marshall Gowland Manor for the devoted care they provided to both Jean and Doug over the years. Donations can be made to Alzheimer Society of Canada (https://alzheimer.ca/en/Home/Get-involved/Ways-to-donate), Marshall Gowland Manor (https://www.lambtoncares.ca/donate/ways-to-give/) or Bluewater Health Foundation Palliative Care (https://19594.thankyou4caring.org/donate). Messages of condolence & memories may be left at www.mckenzieblundy.com

To send flowers to the family or plant a tree in memory of Joseph McFadden, please visit Tribute Store

Share Your Memory of
Joseph
Upload Your Memory View All Memories
Be the first to upload a memory!
Share A Memory
Send Flowers