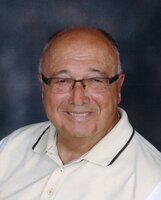 BUONO, Gervasio - In loving memory of Gervasio (Gerry) Buono who passed away peacefully on August 25, 2021 after years of battling his health. Gerry moved to Sarnia from Alvito, Italy as a child with his family and told many stories about his home country which he missed greatly. After attending Eastern Michigan University majoring in French, Spanish, Italian and German he graduated from London’s Teachers College. Instead of entering the field of teaching he was a successful salesman before he worked as a welder for the building of the Petrosar chemical plant. He joined the Local 663 Plumber Pipe Fitters Union until retiring as a planner at Sunoco. You could spot Gerry out for his walk every evening, the same route he took for over 30 years. Later on when his health took a turn, you could see him out for a ride on his bike where enjoyed sitting under the Bluewater Bridge with many of his acquaintances. Gerry enjoyed spending his days helping others in need and cared deeply for the people in his life and for the wellbeing of animals. He adored his friends and neighbours dogs and cats and always kept a handful of treats for them in his pockets. We’d like to thank the caring staff at Bluewater Health’s ICU, Telemetry and Palliative units as Gerry adored his nurses and was grateful for their patience and care. He is predeceased by his parents Teresa and Loreto Buono. He is survived by his wife Jane, children Adam (Terri) of Dundas, Nick (Tina) of Sarnia, grandchildren Christopher and Ella, daughter Andrea (Aaron) of Bull River B.C. grandchildren Elora and Heiko, sister Anne Buono, Sarnia, Sister-in-law Mary Thompson (Paul Cook) of Port Charlotte, Florida and dear nieces and nephews Leslie Foster of Grand Bend, Tara Thompson of Windsor, Jamie Thompson of Sarnia and good friend Jodi Moore. A memorial luncheon will be held at the Smith Funeral Home Family Centre on Sunday from 2-4 p.m. As an expression of sympathy, friends who wish may send memorial donations to St. Joseph’s Hospice, 475 N. Christina St., Sarnia, N7T 5W3. Arrangements entrusted to the McKenzie & Blundy Funeral Home & Cremation Centre, 519-344-3131. Messages of condolence & memories may be left at www.mckenzieblundy.com.