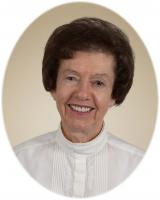 BOWMAN (GREER), Marjorie Elizabeth - Born in Kincardine Township on May 29, 1928, Marjorie died peacefully with her family at her side at St. Joseph’s Hospice, Sarnia, on Tuesday, July 3, 2012.  Beloved wife of Clement Willis Bowman.  Loving mother of Elizabeth Ann Bowman & her husband Peter Cawood and John Clement Bowman & his wife Sybille Wunsam.  Cherished grandmother to Emma & Ian Cawood and Philip & Sophie Bowman.  Dear sister-in-law to Marianne Greer and James Bolton.  Also survived and loved by many nieces and nephews.  Predeceased by parents Laura Zita (nee Cunningham) and Albert Arthur Greer, brother Arthur Ernest Greer, and sisters-in-law Betty Bolton, Joyce & Maurice Dudley.  Marjorie graduated in 1953 from Victoria College, University of Toronto with an honours degree in sociology. She married Clement Bowman in 1954, and celebrated their 57th wedding anniversary in August, 2011. Marjorie and her husband lived most of their life in two cities, Sarnia and Edmonton, making many friends in both places.  For the past 21 years Marjorie and Clement also spent winters in Florida, first at Victoria Estates and then at Bobcat Trail.  Marjorie was passionate about education for young people and worked as a primary school teacher in Hamilton, Kingston, Toronto, and Edmonton. Her specialty was taking a single group of students through Grade 1 to 4, resulting in numerous lifelong associations. A prime focus of Marjorie’s life was her four grandchildren.  Marjorie was an experienced potter and her signature hanging pots are found in many homes across Canada.  She loved gardening and her raised flower and vegetable gardens always attracted admiration by visitors to her home in Sarnia.  Marjorie was always ready for adventure and prepared to try new things, whether it was golf, Latin American or ballroom dancing, new languages, backpacking, skiing, university women’s groups, or gourmet cooking.  Except for 3 valiant battles with cancer over a 28 year period, Marjorie was healthy and active.  Her family on both the Bowman and Greer sides treasured every day they shared with her during her rich and productive life.  Friends will be received at the McKENZIE & BLUNDY FUNERAL HOME & CREMATION CENTRE on Tuesday, July 10th from 10-11 a.m.  A celebration of Marjorie’s life will follow in the McKenzie & Blundy Chapel at 11 a.m. with Rev. Deanna Gibson officiating.  Interment Lakeview Cemetery.  As an expression of sympathy, memorial donations may be sent to St. Joseph’s Hospice, 475 N. Christina St., Sarnia, ON  N7T 5W3.  Messages of condolence and memories may be left at www.mckenzieblundy.com A tree will be planted in memory of Marjorie Bowman in the McKenzie & Blundy Memorial Forest. Dedication service Sunday, September 16th, 2012 at 2:00 p.m. at the Wawanosh Wetlands Conservation Area.